Petrobras has completed drilling well 4-SPS-86B, known as Carcará, in block BM-S-8 in the ultra-deepwater Santos Basin pre-salt. A significant column was found after drilling 5,742 meters containing at least 471 meters of excellent quality oil with an API of 31° and free of CO2 and H2S contaminants. The well, located 232 km off the coast, was drilled in water depths of 2,027 meters.

Data collected from the well – logs, lateral cores, fluids and pressures – as well as petrophysical analysis and long duration tests in pre-salt reservoirs support the expectation that the oil flow in the drilled reservoirs has more potential. This will be confirmed by ongoing exploratory activities in the area, which includes drilling an extension well in 2013, to assess the productivity of the reservoirs using a formation test.

Due to operational issues, it was not possible to reach the final depth of 7,000 meters to carry out an additional assessment. The well has been temporarily abandoned, allowing for the operation to be resumed in the future if the consortium wishes to do so.

Carcará is expected to start producing oil in 2018, with development wells being drilled throughout 2016 and 2017. 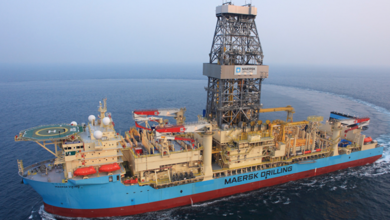