Pacific Drilling’s Pacific Scirocco has mobilized to a quayside in South Africa to undergo upgrades and modifications to ensure reliability prior to beginning operations in Nigeria for Total E&P. The client-requested modifications may delay contract commencement potentially to the end of Q4 this year. The Samsung design drillship was delivered to Pacific Drilling in April this year.

Similar engine modifications on the Pacific Santa Ana are scheduled prior to the rig’s delivery from the South Korean shipyard during Q4 this year. The Pacific Santa Ana has been contracted to Chevron to provide the first commercial application of dual-gradient drilling, which uses a pump or other method to reduce the hydrostatic head from the mudline to the surface to that of seawater.

Last week Pacific Drilling began operations on its Pacific Bora ultra-deepwater drillship on the Agbami Field offshore Nigeria. The rig is contracted to a Chevron subsidiary for three years.

NOV to deliver $1.5 billion in drillship equipment packages to Brazil 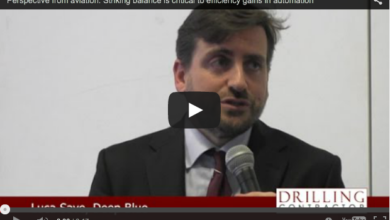 Perspective from aviation: Striking balance is critical to efficiency gains in automation