Increased well productivity as Petrobras improves its knowledge of pre-salt reservoir behavior has allowed the company to reduce the necessary investments for production by approximately 45%, and that in turn has allowed the company to take its breakeven price from $40-45 to $35-40, Petrobras CEO Jose Sergio Gabrielli said during a news conference during the Offshore Technology Conference in Houston on 3 May.

Improvements in the average productivity of pre-salt wells has also led to a lower demand for wells to be drilled in the short term, added Jose Formigli, Petrobras pre-salt executive manager. “Having that, of course the demand of rigs that was previously considered in our plan will reduce a little bit. It’s a balance that every year we are doing,” he said. “It’s very unstable the number that you have that you consider what will be the demand from Petrobras for the coming years in terms of rigs because every four, six months we are replanning and new opportunities come, and we decide what to do in terms of which rigs we will sign for each asset.”

In reference to the two tenders that Petrobras had put out – one for the construction of rigs in Brazil and the other for the leasing for rigs constructed in Brazil – Mr Gabrielli noted that Petrobras “got plenty of offers for both of them. More than what we need actually.” For the tender for rig construction, now that the company has awarded the first batch of seven rigs to Estaleiro Atlantico Sul in the northeastern part of Brazil, “we now have to decide how we are going back to the market to get the 21 additional that we need,” Mr Gabrielli added.

Mr Formigli also confirmed that Petrobras is going ahead with the construction of offshore logistical “hubs” for fluids and diesel. They will be located “on the intermediate path from shore to the platform,” which normally ranges from 300km to 350km. Other transportation hubs, for people and cargo, are in the conceptual phase.

In the Gulf of Mexico, the company is applying for a permit to drill the second well in Cascade-Chinook development. The Pride drillship Deep Ocean Mendocino is being mobilized to the region to drill this well. Petrobras Americas president Orlando Azevedo said he expects the drillship to arrive in early June and for drilling to start in late July or early August. For 2012, the company will look to apply for a permit to drill another well in the Walker Ridge area’s Big Band block.

Mr Gabrielli added that Petrobras already has 180 blocks in the Gulf of Mexico, with around 130 of those in the exploration phase. “We have to look a little bit more on this portfolio before we decide if to go further in the Gulf of Mexico,” he said.  The company is finishing its new strategic plan for 2011-2015 and expects to announce it later this month. 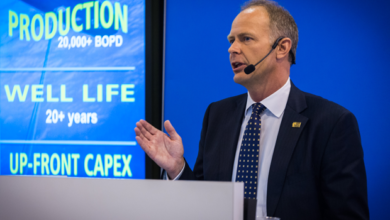