Applications from Congo to Ecuador, from China to Colombia demonstrate enhanced durability in hard-rock environments

Drill bit technology has advanced significantly in recent years, as designs feature improved durability to drill through a wider range of lithologies. Fitting the bit with the correct cutter technology is vital to overcome operational challenges, such as damage and dulling due to abrasion, thermal factors and impact damage from high torsional and lateral vibrations. The integration of the latest advancements in materials engineering and cutter technology is crucial to maximize drilling efficiency and reducing trips.

The FuseTek line of hybrid bits provides controlled wear and extended durability in hard, interbedded lithologies, incorporating a mix of diamond impregnated material as part of the blades on select PDC bit designs.

To refine the PDC cutter selection, these designs are normally fitted with Helios and/or Helios Impact thermally stable cutters. The dual cutting structure of the drill bit provides greater durability in hard rock applications due to abrasion and impact damage. The primary cutting elements have been placed to expose the diamond impregnated material in the secondary row to control the wear when the bit experiences varying compressive strength rock transitions without sacrificing ROP. This change in wear modes and cutting mechanisms from shearing to grinding increases the durability of the cutting structure.

This makes this bit ideal for extreme environments, including PDC-drillable formations containing hard/harsh interbeds with high compressive strength, and wells with high ROP sequences in the top and middle sections but higher compressive strength rock toward the end, as they usually force a trip to surface for either diamond impregnated or TCI bits.

A highly interbedded lithology in the 1,400-meter long 8 ½-in. section onshore in the Republic of Congo typically demands numerous bit trips in a conglomeratic sequence at varying depths and thicknesses. In the past, roller cone insert bits had been used to drill such sequences, often resulting in multiple trips due to issues with bearing reliability and cutting structure integrity. Generally, various PDC, diamond impregnated and roller cone bit types are needed to complete the entire section.  The section has required as many as 11 bit runs to reach total depth, and in the best cases it has gone down to five bit runs. Rock strength values range from 5 ksi to 35 ksi depending on the formation member.

For this application of the hybrid bit design, two targets were identified: to drill a long interval into the conglomerates, minimizing bit trips in the middle of the section, and to drill into the lower section down to TD without a bit change.  The second target was achieved completely, while the first one was partially reached due to the varying thicknesses of the conglomerates, resulting in inconsistent bit performance.

A total of 22 runs with the hybrid design, with 21 bits in 19 wells, have taken place since the introduction of the technology.

Figure 1 compares performance in various offset wells in the field. Direct offset wells “A” and “B” used PDC and hybrid designs. The subject hybrid design in well “B” drilled more than three times the interval with approximately double the ROP of the offset hybrid in well “A.” Well “D” used five roller cone insert bits at ROPs averaging 2 meter/hr, compared with well “C,” where the subject hybrid bit drilled a significantly longer interval at 3.6 meter/hr in one run.

The onshore Yuralpa field in Ecuador has been drilled with directional and horizontal wells. A typical build section is drilled within an intrusive rock section composed primarily of basalt in the 8½-in. section. Historically, this section has been drilled with roller cone insert bits, but problems associated with cutting structure durability and bearing reliability

have resulted in poor drilling performance and high costs for the operator.  The intrusive sections in offset horizontal wells in the area had been drilled at an average of 234 ft at 9.9 ft/hr per bit.

Recently, a horizontal section used a total of three insert bits (IADC 617) for drilling the 610 ft of intrusive rock section with an ROP ranging from 7 ft/hr to 12 ft/hr. The challenge in the subject well was to build angle within the intrusive section at doglegs of 3-4°/100 ft. The first 8 ½-in. FT813 hybrid bit was expected to drill 400 ft at 12 ft/hr net ROP.

In its first trial, the 8 ½-in. FT813 drilled 738 ft of intrusive rock, plus 317 ft of sandstone, shale and limestone for a total interval drilled of 1,055 ft at a field record ROP of 28 ft/hr. The objective of building angle from 64° to 84° of inclination was achieved along with a slight azimuth change, and 4.5 drilling days and three bit trips were saved. At the end of the run, the bit was graded 2-4-BT-A-X-I-CT-BHA (Figure 2).

The second hybrid bit run into the intrusive drilled 681 ft at 18.8 ft/hr and was graded 0-3-BT-A-X-I-NO-DMF. Some parameters changed compared with the first application, including a higher mud weight and less alteration of the intrusive rock composition. The third run accumulated a total of 364 ft of intrusive drilled, plus 95 ft of Hollin formation, made up mainly of sandstones, limestones and shales, and was later rerun for an additional 433 ft within the Hollin formation.

The hybrid concept was introduced to China in Bohai Bay with the FT813 design, which had multiple runs on various drive types, including motor, rotary steerable system (RSS) and rotary.  During these tests, the hybrid bit drilled as much as 233% further than the offset in coarse sandstone with claystone stringers and 30 meters of consolidated conglomerates on a steerable motor.

These runs were followed by a six-bladed 13-mm hybrid drill bit used in the Xiachuandong field to drill the Xixia formation, which consists of limestone with chert nodules up to 7 mm in diameter. The bit drilled 45% further than the offset and demonstrated excellent directional control while building inclination from 26° to 63°.

New well designs with different hole sizes followed, and the FuseTek hybrid drill bits were designed for an application in the Tarim field.

The Miocene Jidike group is one of the most challenging formations in the Keshen block. It is a hard and abrasive formation whose variable compressive strengths and interbedded nature provides potential for damaging vibrations.  Its properties include:

Additional complications are often evident while drilling in the Keshen block, due to borehole wall sloughing and the high dip angle of 60-80°, which causes a high tendency toward deviation. For this reason, vertical drilling systems are often used in this area to maintain verticality.

Compared with the performance of the conventional PDC bits in the same well, the hybrid bit drilled faster than the preceding nine bits, with competitive interval drilled (Figure 4).

The second 13 1/8-in. FT613 bit was run on a vertical RSS in Keshen 206. The bit was run in hole from a depth of 4,416 meters and drilled the first 56 meters at 8.7 meter/hr, before being pulled due to downhole tool failure. At surface, the bit was found to be in good condition, so it was rerun. This time, the bit drilled 228 meters at 3.8 meter/hr before yet another trip due to the BHA.

Once again, at surface the bit was found to be rerunnable and completed the section with a third run drilling to TD. This amounted to 363.6 meters at an average of 3.48 meter/hr. The bit was deemed to still be in good condition and was subsequently rerun on Keshen 208.

Although detailed run data is limited, the bit was reported to have drilled through two layers of conglomerate at an average ROP of more than 5 meter/hr. Compared with the original objectives for the new 13 1/8-in. FT613 bit (200-300 meters at 1.5-2.5 meter/hr), this performance was outstanding.

Figure 5 shows offset wells that drilled the N1J formation, both of which took five to six bits to drill the section. The subject hybrid bit more than doubled the footage drilled compared with the next-longest offset bit run (178 meters) as well as the ROP for the next-fastest offset bit run (1.65 meter/hr).

The Pauto Sur field is located in the Andean foothills basin of Colombia, in the northeast region in the Casanare department. The 18 ½-in. section contains mainly sandstones, claystones and shales, presenting a challenge in drill bit durability due to the abrasive nature of the rocks.

The challenge was to drill the 18 ½-in. interval from 3,879 ft to 5,500 ft. The new bit design would have to address durability and steerability issues and be able to be used with a RSS and motor under high potential vibration in a vertical section with rock strengths of up to 35 ksi. The design proposed was an eight-bladed, 16-mm cutter FuseTek technology drill bit featuring HeliosImpact PDC thermally stable cutters.

The first FuseTek bit (18 ½-in. FT816) run in this field with an RSS assembly outperformed previous achievements in terms of both interval drilled and ROP. The bit drilled 178 ft at a net ROP of 6.4 ft/hr, outperforming the expected ROP (4.5 ft/hr) by 42%. Some rig issues were presented and lateral vibrations were detected during the run, and the string was pulled for non-bit related reasons.

The second run resulted in a field record. The 18 ½-in. FT816 outperformed previous achievements in terms of interval drilled and ROP. The FuseTek bit drilled 521 ft at a net ROP of 6 ft/hr, outperforming the expected ROP (4.5 ft/hr) by 33% and beating the previous longest run in the area by 37%. Figure 6 shows the interval drilled and ROP increase for both runs with the FT816 bit.

Although the bit exhibited some mechanical damage and wear (Figure 7), it accomplished all directional requirements as planned.

FuseTek and Helios are trademarks of NOV. 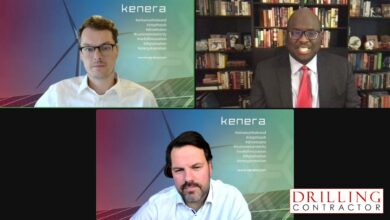 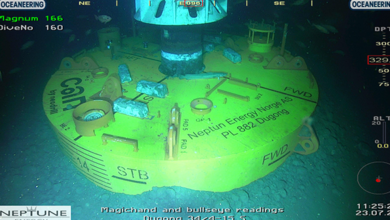