Ronnie Witherspoon, Nabors Drilling USA, will continue to serve as vice president of IADC’s land division, as will David Reid, National Oilwell Varco, in his role as VP of the drilling & well services division. Thomas Burke, Rowan Companies, was elected as the new offshore division VP.

Dr Lee Hunt was reelected as president of IADC for his 22nd year. Also reelected were Brian Petty as executive VP of government affairs; Tom Terrell as senior VP of business development; Mike Killalea as group VP and publisher; and Steve Kropla as group VP of operations and accreditation.

Mr Rabun joined Ensco in March 2006 as president and director. He was appointed CEO and chairman of the board in 2007. He now serves as chairman, president and CEO of the company. Before joining Ensco, he was a partner at the international law firm of Baker & McKenzie, where he practiced law for 20 years. He is a certified public accountant and holds a BBA in accounting from the University of Houston and a Juris Doctorate degree from Southern Methodist University.

Mr Williams has served as chairman, president and CEO of Noble since January 2008. He previously served the company as senior VP and chief operating officer, senior VP of operations and senior VP of business development. Prior to joining Noble, he served for more than five years as executive VP of Diamond Offshore Drilling. 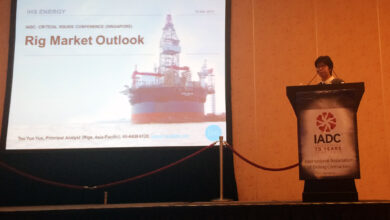 IHS: Perfect storm puts pressure on contractors on both supply and demand