Thomas Burke was appointed Chief Executive Officer and elected a director of Rowan Companies in April 2014. He served as Chief Operating Officer beginning in July 2011 and was appointed President in March 2013. Dr Burke first joined the company in December 2009, serving as Chief Executive Officer and President of LeTourneau Technologies until the sale of LeTourneau in June 2011. From 2006 to 2009, Dr Burke was a Division President at Complete Production Services, an oilfield services company, and from 2004 to 2006 served as its Vice President for Corporate Development. Prior to that, he worked at McKinsey & Company and Schlumberger.

Dr Burke received a PhD in Engineering from Trinity College, the University of Oxford, a Bachelor’s in Engineering with honors from the Heriot-Watt University in Scotland, and an MBA from Harvard Business School, where he was awarded a Baker Scholarship.

Jack Winton is President of KCA Deutag Drilling’s Operations Division, which stewards the group’s operational and technical integrity through a number of group functions, including HSSE, equipment and maintenance, supply chain management, business excellence and the operations function, which incorporates performance services, operations integrity and DART.

Mr Winton has been with KCA Deutag for more than 20 years and has held various operational, well engineering and senior regional leadership roles in the UK North Sea, Caspian Sea, the Far East and Africa.

Scott McReaken was named Chief Executive Officer of Sevan Drilling in November 2013. He joined Sevan after serving as the Director of Finance for Seadrill’s Americas Region since July 2012. Before joining Seadrill, he was the Director Financial Planning and Analysis at Vantage Drilling from March 2010 to July 2012. He also held various management positions in accounting at Pride International in its Houston and Angola locations from 2005 to 2010. Prior to working in the contract drilling industry, Mr McReaken spent five years providing audit, assurance and advisory services as an internal auditor at Arthur Andersen.

Mr McReaken holds a Bachelor of Business Administration degree in accounting from The University of Texas at Austin and is a Certified Public Accountant and Certified Internal Auditor.

Lyndol Dew is the Senior Vice President Worldwide Operations for Diamond Offshore Drilling. He graduated from Florida State University in 1976 and received his Master of Engineering Degree from Tulane University in 1982. Mr Dew served in the US Navy as a Surface Warfare Officer for six years. He subsequently worked in various domestic and international positions for Diamond Offshore for the past 32 years.

Mr Garvin earned a Bachelor of Science degree in Engineering from California Polytechnic State University. He has accumulated 36 years of experience in the upstream sector, exploring and drilling for oil, gas and geothermal energy on land and offshore on six continents.

Mr Espeland has more than 35 years of experience in the international oilfield service and rig contracting industry and has spent most of his career working for international companies such as KCA Deutag and ESSAR Oil and with Weatherford International as Group VP for the Rig Division. Throughout his career, Mr Espeland has managed onshore and offshore operations and companies in numerous international locations, including Latin America, Europe, Russia, the Middle East, Africa and Asia Pacific.

He has been involved with IADC for the majority of his career and previously served as a member of the IADC Executive Committee from 2010 to 2012.

Mike Bowie is the North America region leader for the GE Oil & Gas, Subsea & Drilling product companies. In the seven years prior to his current role, he was the global sales and commercial leader for the GE Drilling business. Mr Bowie joined Hydril in 2004 as the Director, Sales & Marketing, Pressure Control Division, and in early 2008, he became responsible for the combined GE Hydril Pressure Control and Vetco Gray Capital Drilling Group sales and commercial support teams. He has 35-plus years of industry experience, including multiple assignments and leadership roles within engineering, technical marketing, quality, sales, operations and regional management at Cameron, Hydril and GE. His background includes international assignments in Australia, Indonesia, United Arab Emirates and the UK.

Mr Bowie earned his BS Mechanical Engineering degree from Texas Tech University and attended the Rice University Advanced Management Institute. He is a registered Professional Engineer in Texas. He and his wife, Glenna, live in Houston and enjoy golf, water sports, other outdoor activities and spending time with family. 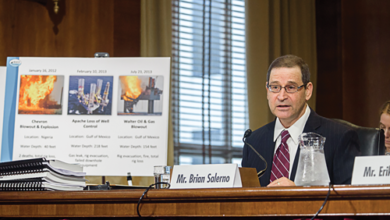