Borr Drilling has announced a binding tender agreement to offer to purchase all outstanding shares in Paragon Offshore. The acquisition is expected to close in March 2018.

Following completion of the transaction, Borr will own 24 premium jackups built after 2000 and become the world’s largest premium jackup rig operator.

Halliburton announced that its Angolan facilities – Luanda-SONILS base, which incorporates the Cabinda-Malembo base and Soyo-Kwanda base facilities – and all of the company’s product service lines in those locations have received the API Specification Q2 Registration. The facilities are the first in Angola to receive this registration, an advanced industry quality standard for oil and natural gas service companies.

Wood has secured a new multimillion-dollar, five-year contract to support Saudi Aramco in the delivery of one of its mega-projects in the Kingdom of Saudi Arabia. Engineering and project management services to develop the Marjan oil field in the state’s eastern province will be provided under the contract, effective immediately. The front-end engineering design, major increment and overall project management consultancy will be executed from Wood’s Reading, UK; Khobar, Saudi Arabia; and India offices.

Apache has awarded a new three-year contract to Archer for the provision of platform drilling management services, which include operations and maintenance on the Forties and Beryl fields. In addition to the firm contract term, two additional two-year extension options are available. Archer has provided these services to Apache on the Forties and Beryl fields since 2004 and 2012, respectively.

Drillmec and GEOLOG have entered a global commercial agreement for joint business development and provision of Drillmec’s Heart of Drilling (HoD) service. HoD is a continuous circulation system that offers uninterrupted bottomhole pressure management during connections.

Aquaterra Energy has appointed Christian Berven as Business Development Director as it strengthens its Europe, Middle East and Africa operations by opening offices in Stavanger. Mr Berven joins the company following 10 years as Managing Director of Norwegian oil service company Toolserv. He has more than 22 years experience in the oil and gas industry and has worked across Europe, Saudi Arabia and Oman.

Oil Spill Response has launched its Offset Installation Equipment (OIE). Designed for scenarios where direct vertical access to a wellhead is not viable, the OIE enables capping or related equipment to be installed at a safe distance from an incident. The OIE was developed in collaboration with the Subsea Well Intervention Project.

Albert Allan has joined KCA Deutag as Senior Vice President of RDS, its rig design and engineering subsidiary. Based in Aberdeen, Mr Allan will have responsibility for spearheading RDS’ activities worldwide. He will also become a member of KCA Deutag’s executive management team, reporting directly to CEO Norrie McKay.

Pat Lawless has been appointed as CEO of EM&I Group. Mr Lawless has been a key member of the team for nearly five years through his role as COO. He takes over from Danny Constantinis, who heads up the board as Executive Chairman.

Chevron has named Bruce Niemeyer as Corporate Vice President of Strategic Planning, effective immediately. Mr Niemeyer was previously Vice President of Chevron’s Mid-Continent Business Unit. In his new role, Mr Niemeyer, will be responsible for setting the strategic direction for the company, allocating capital and other resources and determining operating unit performance measures and targets. He will report to Mark A. Nelson, Vice President of Midstream, Strategy & Policy.

Derrick Equipment Company and STEP Oiltools have been awarded a contract to supply Dual Pool 626 VE shale shakers and a bespoke flow divider for the Statoil Njord A platform. This contract is part of a complete upgrade of the hull and topside of the platform, managed by Kværner. The scope of supply includes four Dual Pool 626 VE shakers that feature Derrick’s fluid centering and Pyramid screen technology for increased solids removal efficiency. The shakers will also include vapor extraction covers to protect personnel from oil mist and vapors emitted during the screening process.

Delta SubSea and Optime SubSea have entered into an agreement to provide combined service solutions to their clients’ deepwater control needs, including XT control for installation, interventions, testing, SCM diagnostics or other subsea XT test or controls applications. This will be supplied via their small and light deepwater Intervention Workover Control System (IWOC) for 3,000 m waters.

TGT Oilfield Services has announced the validation of its electromagnetic EmPulse well inspection system in high chromium tubulars. In three Middle East deployments – one an operator-witnessed “yard test” and the other two in live wells – the system was demonstrated to quantitatively determine the individual tubular thickness of up to four concentric barriers, even when there are high amounts of chrome in the tubulars.

The increase in chrome and the resulting decrease in ferrous content causes electromagnetic (EM) signals to decay too quickly for traditional EM inspection systems. The new system combines ultra-fast sensor technology with time-domain measurement techniques to capture EM signals in a wide range of pipe materials, including those with high-chrome content.

Garland Energy Systems, a division of Postle Industries, has introduced a containment membrane designed for tank battery installations. The Fusion 50 tank battery provides a consistent and durable 50 mils thickness of PVC waterproofing, which can be installed in any temperature and humidity conditions.

GEODynamics has introduced ISOLOC plug and abandonment, specialized-perforating systems for remedial cementing and circulation. ISOLOC perforating systems are used to establish communication between two or more strings of tubing or casing.

The systems improve cement plugging, squeeze and circulation operations with controlled damage to the secondary or tertiary string.

Gardner Denver has announced the launch of its Redline Series with Redline Packing. Packing is the critical seal system in the heart of the frac pump, creating a barrier between frac fluid and the environment.

Gardner Denver collaborated with customers throughout North America for more than a year to test Redline Packing, which has pumped more than 100 million lb of sand; demonstrated high performance in a high-pressure environment; reduced maintenance time by 50%; diminished nonproductive time; and improved fleet utilization and safety. 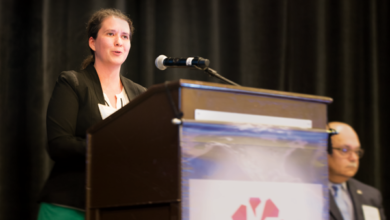 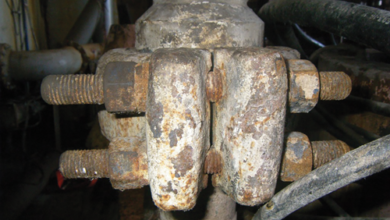