Nabors Industries recently announced a $7 million investment in Natron Energy, a manufacturer of sodium-ion batteries. Natron plans to use the funds to accelerate the production of its sodium-based battery technology at its Michigan facilities, concentrating on industrial power and energy transition markets. Natron and Nabors are also evaluating the introduction of sodium-ion batteries as an energy storage solution for drilling markets.

Huisman has unveiled a proposal for a new harsh-environment semisubmersible that can be powered by onshore-produced hydroelectricity, via a power cable from a nearby platform. Alternatively, it can be powered by two floating wind turbines, which would be moored next to the rig. Huisman called the two solutions “radical but realistic.”

Both types of power, used in tandem with an energy storage system storing regenerated energy, would help to reduce the rig’s emissions footprint by 30-40% per well, according to Huisman. If wind turbines are used, then the company estimates there could be up to an 86% reduction in emissions per well.

The rig also would include a low-drag electrified robotic drilling system and a heave-compensated drill floor, making it suitable for operations in harsh sea conditions. Huisman said it believes the new rig will require 40% fewer people onboard and can contribute to a 25% reduction in cost per well.

Mud cooler system to be deployed for geothermal exploration

OSSO has been awarded a contract to deploy its high-volume mud cooler technology in Germany. The geothermal exploration project will consist of an initial two wells with an aim to reach six development wells within two years. The technology will allow the operator to manage the field’s high bottomhole temperatures of up to 200°C.

Following his appointment in late May, Chris Weber recently commenced his role as Senior Vice President and Chief Financial Officer (CFO) at Valaris. Most recently Mr Weber served as CFO of LUFKIN Industries. He also previously served as CFO of Abaco Drilling Technologies, Halliburton and Parker Drilling, and he held senior finance roles at Ensco and Pride International.

Ian Macpherson has joined Noble Corp as Vice President, Investor Relations. Mr Macpherson previously served 18 years at Piper Sandler and its predecessor firm, Simmons Energy, as lead analyst for the global oilfield services sector, including the offshore drilling industry. He holds a BS from Georgetown University and an MBA from Tulane University.

GD Energy Products has opened a 9,000-sq-ft aftermarket facility in Shreveport, La., to support activities in the Haynesville Shale. John Verzwyvelt will serve as the new facility’s branch manager.

Continental Resources has named Doug Lawler as President and COO. Mr Lawler, who has three decades of experience in the oil and gas industry, had joined the company in February as COO and Executive Vice President.

Tenaris announced it will acquire Benteler Steel & Tube Manufacturing for an aggregate price of $460 million, including $52 million of working capital. Closing is expected to occur during Q4 2022. Benteler produces seamless steel pipe and has an annual pipe rolling capacity of up to 400,000 metric tons.

Aquaterra to supply HPHT riser for exploration in Azerbaijan

CRP Subsea has been awarded a contract to deploy two buoyancy solutions – its rotating buoyancy modules and integral buoyancy modules – in the US Gulf of Mexico. Engineering work will begin this year and target deployment in 2023.

Halliburton introduced its Hedron fixed cutter PDC drill bits, designed using the company’s Design at the Customer Interface process, along with proprietary iBitS modeling and simulation software that enables the design teams to tailor each bit to customer challenges.

Trelleborg Sealing Solutions is offering the new interactive Variseal oil & gas seal selector tool for its customers to configure technical specifications for sealing solutions. Users are able to create a standard or custom seal proposal document. The tool is useful for a wide range of applications, including gate, ball and check valves, connectors and downhole tools.

Ergodyne’s new lightweight hard hats are made with a 14.3-oz HDPE plastic shell that meets both ANSI and CSA standards. They are available in Class C and Class E. Separately, the company has also introduced an intrinsically safe headlamp and two universal headlamp mounting straps aimed at improving worker safety.

The new cloud-based wellhead audit inspection platform from Cudd Well Control aims to reduce the time required, compared with paper-based inspection processes, and to streamline the identification of problems with corrosion, valve functionality and pressure. It enables automated and immediate reporting while in the field, and makes information about the well condition available in a single platform. The tool also places problem wells at the top of the risk matrix to help users prioritize the remediation work needed.

Ingersoll Rand has launched its QX Series 40V cordless torque multiplier, which has a patented closed-loop transducer that provides precision control and records the torque, speed and angle for each bolt or fastener. The tool is powered by a 40-volt battery, and an advanced cooling fan dissipates heat so the tool can run back-to-back cycles without overheating. 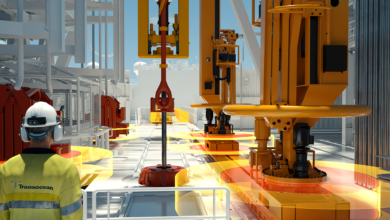 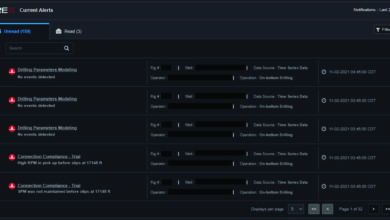