Throughout the North Sea and similarly harsh environments, waiting on weather (WOW) and dealing with exceptional downhole hazards are routine entries on morning reports. Together, they can account for up to 35% of the flat time incurred during well construction operations.

In these narrow drilling windows, managed pressure drilling (MPD) has been the go-to technique, given its capacity to maintain constant drilling fluid pressure, thereby keeping the fracture pressure in check and enabling construction of what could otherwise be undrillable wells. Customarily, MPD deployments offshore are carried out on fixed platforms and jackup rigs, as stationing on less-stable floaters is reserved for areas with gentler sea states.

However, many of the wells drilled in the North Sea and Eastern Canada are landed in water depths outside the operational limits of even the most advanced jackups. Further, as David Carter Shinn, a Partner and Head of Analytics at Norway’s Bassoe Offshore, posted on 27 August 2018, given widespread rig retirements during the downturn, the global industry now finds itself with a reduced fleet of semisubmersibles capable of working in harsh environments, just as the offshore is starting to show signs of recovery.

The imputed supply gap, in tandem with inherent weather and downhole issues, inspired the design of a new-generation harsh-environment semisubmersible, incorporating the industry’s only fully heave-compensated and energy-neutral drill floor, with correspondingly heave-compensated robotic-enabled tool handling.

By essentially eliminating surge and swab, the semi is designed to safely expand the operating weather window, conceivably reducing well delivery times and costs by as much as 40% per well, while enhancing overall HSE performance during drilling, workover and completion exercises. Notably, the rig is designed to promote jackup-like rig floor stability, with zero additional energy consumption, clearing the way for running MPD in otherwise prohibitive high sea conditions. In combination with the comparably larger deck space, MPD capabilities make the semi fully equipped for infield subsea field development.

The rig design is well aligned with the “Rig for the Future” vision, as recently presented by Equinor’s Per Haaland, Director of Efficiency and Rig Management. In short, Equinor wants a lightweight dream rig equipped with robots, half-staffed, consuming less fuel and halving operating costs.

The Huisman harsh-environment semi is designed with features that balance HSE performance and operational efficiency in tough sea states. For instance, the rig is designed to allow the deployment of dual ROVs directly through the columns, rather than being forced to postpone operations until suitable sea conditions allow overboard launching.

The rig is engineered with a triple-floor deckbox, thereby doing away with the standard accommodations super-structure while providing up to 70% more flat, workable deck space than current-generation semis.

The increased work and storage space reduces the requirement for supply vessels, which are also prone to weather-related work interruptions. Further, the large deck stores completion, subsea umbilical, riser and flexible (SURF) equipment that can be installed using the heave-compensated rig crane while drilling operations are ongoing.

A prominent difference in the new design is replacement of the standard drilling derrick and substructure found on typical rigs with the robotic dual-multi-purpose tower (DMPT). Because this proprietary technology eliminates the substructure, the subsequent low center of gravity allows for the continual building and running of 180-ft stands of pipe, while the flush upper deck facilitates autonomous skidding of equipment and tubulars.

The robotic pipe-handling system comprises small and robust multifunctional manipulators mounted on tracks built into the corners of the drilling tower, enabling fingertip-control of tubular handling and running activities. Automated pipe handling in concert with the open-character design of the harsh-environment semi enables a fully heave-compensated floor (HCF), which also functions as a heave-compensated tension frame. Analogously, heave-compensated tool handling eliminates tubular heave movement in harsh environments – even when strings are hung off in the slips – and removes rig hands from the so-called red zone, reducing injury risks.

The genesis of the fully heave-compensated rig floor can be traced to the early 1980s, with the debut of passive and active heave compensation techniques to reduce the effects of wave action on the safe lifting and landing of loads. Passive heave compensation (PHC) systems generally react to external forces without requiring additional energy for motion control. Conversely, active heave compensation (AHC) needs an external energy-consuming control system to actively and accurately compensate for sea-driven movement. By the mid- to late 1990s, AHC systems had emerged as fixtures on many of the semisubmersibles working in the North Sea.

Tubular stands, which are regularly hung off in the slips/floor, pose distinctive challenges. Previously, since neither the floor nor slip had employed any form of heave compensation, when hung off, the pipe tends to heave in the well during connections.

The HCF represents advances in heave compensation technology by eliminating the heaving drill floor slip issue. As noted, the HCF also acts much like a heave-compensated tension frame, meaning the robotic arms with the iron roughneck and pipe clamps are also heave compensated. When tubulars are hung off in the drill floor slips during the fully heave-compensated mode, they essentially are tied to the sea floor, much like that of a jackup rig.

In addition, the floor is designed for automated movability, thus enabling it to be lowered flush with the main deck for standard drilling, workover and completion operations, or raised and engaged in the heave-compensated mode for deployment of the subsea BOP stack.

Constant heaving is unavoidable for both a conventional drill floor on a floater and for the HCF in the lowered mode position with the telescoping joint (TJ) stroking in and out. The difference becomes evident when the HCF is actively compensating for heave and the TJ remains fully extended with no movement in relation to the seabed.

The HCF is designed with the capacity to transition readily from conventional (static) to compensating mode. In the static and usually cased-hole mode, the HCF remains flush with the main deck, where riser tensioners via the TJ support the riser on the seabed. The conventional mode enables the running of 180-ft stands with a maximum TJ stroke of 65 ft. The active compensating mode is primarily engaged in open-hole drilling and completions operations. During AHC, the drill string with 135- to 150-ft stands is always heave compensated with maximum 25-ft compensation. Once the floor is fingertip-lowered flush with the main deck, various pieces of equipment can be skidded to the well center, reducing personnel exposure to crane lifts and other cargo-handling activities.

One of most frequently cited drawbacks of the standard active compensation systems used in the hoisting mechanism of conventional floaters is the high volumes of energy consumed while drilling. The new generation semi, however, is designed as a passive system, yet exclusively generates the performance and precision of an active heave compensation system.

While the marine riser connects the HCF to the sea floor, the HCF is hydraulically connected to passive heave-compensated cylinders installed within the DMPT. Oil from the cylinders drive the PHC cylinders, while the drill string remains immobile in relation to the seabed. The static load is carried by nitrogen whenever the pipe is either suspended by the block or hung off.

In essence, the energy-neutral mechanism is designed around the fixed length of the riser, effectively providing a seabed reference to the rig.

While used widely offshore, MPD is heavily influenced by heave-induced oscillations, thereby making applications on floating drilling rigs highly problematic, especially in narrow drilling margins. The nonstop vertical movement of the drill pipe in response to wave action induces downhole pressure fluctuations. In a constricted drilling window, this can lead to lost circulation and the influx of formation fluid, which can exacerbate well control risks and effectively negate the inherent benefits of MPD.

The HCF eliminates the effects of wave movement, providing a stabilized platform for effective MPD application. To point: Having the drill string heave compensated at all times knocks out the pressure fluctuations otherwise arising from the surge and swab tendencies of the rig floor on a conventional floater when the drill string is hung off in the slips. By keeping the drill pipe stationary in the RCD, the HCF enables MPD to proceed without the risks associated with surge, swab and premature seal wear.

The adverse effects of heavy sea states are especially pronounced during workover and completion exercises conducted from current-generation floating rigs. Normally, running delicate completion tubing in a traditional substructure and rotary table configuration requires the attachment of sensitive control lines through the rotary, where constant rig movement in high seas increase the risks of irreversible damage.

By raising the HCF, tubulars can be hung off nearly 4 m above the drill floor, enabling the control lines to be clamped underneath the slips and protected from the risks of crushing, while also reducing the time required to terminate the control lines. In cased wells, having the tubing and control lines continually heave compensated eliminates the risks of abrasive wear and tear from casing contact.

Again, since the HCF acts as a heave-compensated tension frame for workover operations, all tubulars, including coiled tubing and wireline, are heave compensated when run in the hole, allowing the collection of longer core samples or core recovery efficiency.

Importantly, with the open design of the dual drilling tower and lowering the HCF flush with the main deck, the subsea test tree (SSTT) can be assembled and tested offline. Consequently, after leaving the test frame, the SSTT can be easily skidded to the well center, saving hours during this critical and risk-prone completions operation. Additionally, the flat and unobstructed work floor provides safe and ample access for rig-up and rig-down of workover equipment with offline rig-up capacity.

As designed, the proposed advanced semisubmersible drilling rig promises has the potential to increase the value of harsh-environment assets. It has built-in efficiency drivers, such as the robotic pipe-handling technologies, and comparatively more expansive deck space, which can reduce, for instance, the reliance on standby supply vessels. It is reasonable to quantify a 30-40% cost saving per well. These projects also include an estimated 30% reduction in fuel savings, along with up to 50% less emissions per well.

Further, there can be an expected enhancement in safety arising from removing personnel from hazardous activities, reducing crane lifts and the design of safe non-obstructive work decks. DC

This article is based on a presentation at the 2019 IADC Advanced Rig Technology Conference & Exhibition, 22-23 October, Amsterdam. 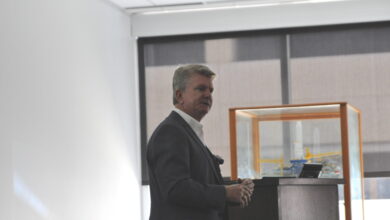 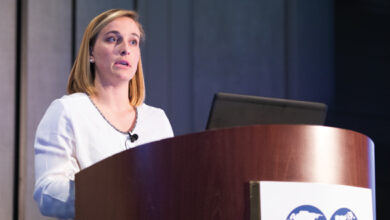