BP has announced the start of gas production from the Atoll Phase One project offshore Egypt. The project, in the North Damietta concession in the East Nile Delta, was delivered seven months ahead of schedule and 33% below the initial cost estimate.

The project is now producing 350 million cu ft/day of gas and 10,000 bbl/day of condensate. Gas production from the field is directed to Egypt’s national grid.

In other news, BP also announced two new exploration discoveries in the North Sea. The discoveries are Capercaillie, in Block 29/4e in the Central North Sea, and Achmelvich, in Block 206/9b West of Shetland. BP is 100% owner of Capercaillie, and the Achmelvich well partnership comprises BP (operator, 52.6%), Shell (28%) and Chevron (19.4%).

The Capercaillie well was drilled to a total depth of 3,750 m and encountered light oil and gas-condensate in Paleocene and Cretaceous-age reservoirs. The well data is under evaluation. Options are expected to be considered for a possible tieback development to existing infrastructure.

The Achmelvich well was drilled to a total depth of 2,395 m and encountered oil in Mesozoic-age reservoirs. Evaluation and interpretation of the well results is ongoing to assess future options.

Shell has announced one of its largest US Gulf of Mexico exploration finds in the past decade from the Whale deepwater well. The well encountered more than 1,400 net ft (427 m) of oil-bearing pay. Evaluation of the discovery is ongoing, and appraisal drilling is under way to further delineate the discovery and define development options.

Whale is operated by Shell (60%) and co-owned by Chevron (40%). It was discovered in the Alaminos Canyon Block 772, adjacent to the Shell-operated Silvertip field.

CNH awarded 19 of the 29 blocks that were offered. “We commend Mexico on a historical, successful bid round; for Shell, today’s win marks a competitive, deepwater entry in Mexico,” said Andy Brown, Upstream Director, Shell. “The proximity and technical similarity of this opportunity to our leading position in the US Gulf of Mexico will allow us to benefit from and build upon decades of experience, complementing our position in the region.”

Chevron has announced a significant oil discovery at the Ballymore prospect in the deepwater US Gulf of Mexico. Ballymore is located in the Mississippi Canyon area of the US Gulf of Mexico, approximately 3 miles from Chevron’s Blind Faith platform, in a water depth of 6,536 ft.

The initial Ballymore well reached a total measured depth of 29,194 ft and encountered more than 670 ft net oil pay with excellent reservoir and fluid characteristics. A sidetrack well is being drilled to further assess the discovery and begin to define development options.

Chevron holds a 60% working interest in the Ballymore prospect, while Total E&P holds 40%.

Bentec to build new land rig for PGNiG in Poland

Bentec, a subsidiary of KCA Deutag, has signed a contract with Polskie Górnictwo Naftowe i Gazownictwo (PGNiG, Polish Oil and Gas Company) to supply a newbuild 2,000-hp drilling rig, with a hookload capacity of 500 tons.

The high-performance land rig will be manufactured at Bentec’s production facilities in Bad Bentheim and will incorporate the latest pipe-handling solutions, a remote-controlled Iron Roughneck, and hydraulic catwalk and rig-walking systems.

The rig is scheduled to start operating in Poland later this year, with delivery to PGNiG scheduled for autumn.

Vantage Drilling has entered into a contract with New Age Cameroon Offshore Petroleum for its premium jackup rig, the Topaz Driller, to perform drilling services in Cameroon for 150 days.

Transocean Arctic to drill for Wellesley in North Sea

Transocean has won a three-firm slot contract for the Transocean Arctic semisubmersible rig with Wellesley Petroleum. The commencement date for the contract is 1 June 2018.

The Transocean Arctic will be employed on an exploration drilling campaign in the Måløy Slope area of the Northern North Sea (blocks 35/11 and 12). It will drill two exploration wells in the Wellesley-operated PL925 license. Plans are also being made to drill a further exploration well to test an extension of the currently stranded Grosbeak Discovery.

The SAGA jackup has been delivered to Borr Drilling from Keppel FELS, a wholly owned subsidiary of Keppel Offshore & Marine. SAGA is the first of five jackup rigs that Keppel is building for Borr Drilling and is of KFELS Super B Class design. The KFELS Super B Class rigs are designed to operate in 400-ft water depth and can drill to 35,000 ft. They are also equipped with a 2 million-lb drilling system.

The total estimated contract value is $15 million to $20 million for the two firm wells. Mobilization and demobilization are included in the amount, but remotely operated vehicles and other services will be charged extra. Planned drilling start is summer 2018.

Frigstad Offshore has launched a project to build a new-generation, harsh-environment semisubmersible that the company says will be suitable for “all water drilling,” from 350 ft to 14,000 ft of water depth, “which would be the deepest currently rated in the world,” CEO Dag Frigstad said.

The Frigstad D90 AWD design, developed by affiliate Frigstad Engineering, is the third generation in the Frigstad D90 series, featuring two main drill floors that are independent of each other. Multiple tasks, such as drilling and casing makeup, can be carried out simultaneously and independently. “The focus is not on ultra-deepwater but on ultra-efficiency… We wanted to design a versatile unit that an oil company can take on for a long-term contract that can be used for all the relevant programs that they have,” Mr Frigstad said.

The rig design incorporates a hybrid power solution that runs on both a power-generation system and batteries, which helps to stabilize power consumption.

The hybrid power solution will significantly reduce fuel usage and emissions, which makes the rig ideal for the European market, where environmental regulations are particularly stringent. “We’ve gone through the highest environmental accreditation we can with low emissions and using the least amount of fuel that we can,” Mr Frigstad said, adding that West Africa, the Gulf of Mexico and Brazil are also potential markets.

The company is also designing the rig so that it can be easily adapted for higher levels of robotics in the future, particularly on the drill floor. “Our ultimate goal as a rig designer is to be able to build a rig that can operate without people,” Mr Frigstad said. “This will not happen immediately, but it’s something that we have as a mission, and it’s being incorporated into the design.”

The Frigstad D90 design has been used to build three drilling rigs since 2006. The first-generation D90 design, the Scarabeo 9, was delivered to Saipem in 2011 and has since operated in Cuba, West Africa and the Black Sea.

Frigstad Group ordered the second-generation D90 rigs, the Bluewhale 1 and the Bluewhale 2, jointly with Chinese investors in 2012 before withdrawing from the investment in late 2016. The first of these units, the Bluewhale 1, recently completed its first drilling campaign in the South China Sea.

A tender for the new-design rig has been initiated with shipyards, possibly for two units initially and with various equipment options, according to Mr Frigstad.

Essar Oilfields Services India has been awarded a contract by the Gas Authority of India Limited (GAIL) to drill three firm plus two optional wells in Gujarat’s Cambay basin. Drilling is expected to commence in April to May 2018.

Essar will use the 1,000-hp Essar Rig MR01 to drill the wells for GAIL. The rig will be deployed for the GAIL project after finishing its current work for Mercator Petroleum.

In addition to its 15 land rigs, Essar also operates the Essar Wildcat semi, which can drill in water depths of up to 1,600 ft and drill wells up to 25,000 ft. The rig is on a three-year contract with ONGC on the east coast of India. 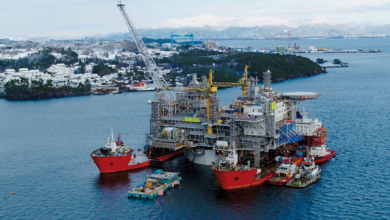 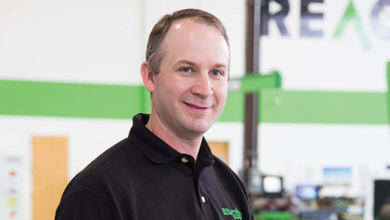