Schlumberger is in the final stages of commissioning its Rig of the Future, which should be commercial by early 2018, Arindam Bhattacharya, President of Schlumberger Land Rigs, said at the 2017 IADC Advanced Rig Technology Conference on 25 October in Amsterdam. The rig brings together not only automation but also mechanization, including a central hoisting and rotating system, as well as an integrated fluid system that will help to integrate workflows like cementing and managed pressure drilling. Elements of the downhole system, like stick-slip mitigation, can also be optimized through automation.

The Rig of the Future project was driven by the lower oil price environment and the desire to thrive, not just survive, in this environment, Mr Bhattacharya added. To reduce the cost of well delivery so that all players in the supply chain can deliver attractive returns to their shareholders – even during down cycles – the industry must look past incremental technology improvements. “We really need to look at this in a much more holistic and disruptive way, and we need to challenge the performance benchmarks that are in front of us,” he said.

Challenges to this traditional approach include data silos, where there isn’t always a single plan being used by everyone across the interfaces. “Those plans very quickly get broken down into versions of that plan that each of these scopes are looking at separately. When you have different plans, you have different perceptions of risk and contingencies… You have different commercial models, mostly time and material between each one of these, and they are not necessarily aligned with the ultimate objective.”

To determine how workflows can be streamlined, Schlumberger looked to the Permian Basin specifically and examined 4,000 steps involved in drilling a well in that play. These steps were then broken down into approximately 200 multidisciplinary workflows. “We made sure we kept out the traditional nomenclature or traditional concepts of ‘this supplier’ or ‘that service company’ but just to look at it from a basic process of drilling a well – and look at it from the way we should do it, not how we do it today.”

The company also recognized that, even within a mapped-out process of the well construction workflow, there must be allowances for flexibility due to the inherent uncertainties involved in drilling a well. This means there must be a framework for doing exception management and change management on the fly, he said, adding that the flexibility of Schlumberger’s digital drilling platform comes from an artificial intelligence-based engine. The cloud-based DrillPlan enables a single digital drilling plan to be used, with all teams working on the same plan at the same time. “It’s an automated well plan delivery process on which you are able to have every single individual contribute to that in their own sandbox,” Mr Bhattacharya said.

The operating program delivered by DrillPlan is then transferred to the DRILLOPS execution engine, which orchestrates the plan among all the different players. “The orchestration of DRILLOPS gives the ability to drive change management depending on the degree of change and the level of condition-based monitoring, etc, which are critical elements driving the entire process.”

The key, Mr Bhattacharya emphasized, is that every well is better than the one before due to the continuous learning enabled by the cognitive drilling system. Ultimately, this new approach to well construction will open opportunities to performance-based commercial models that align service companies with their operator customers, even during tough times. “When we are able to create value, we are also able to be a part of the winning process.”

Survey: Where will the North American rig count by in September 2010? 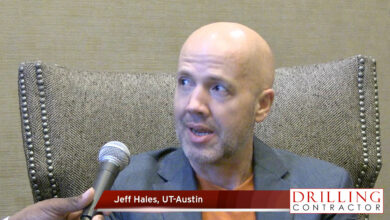