Maersk Drilling has been awarded contracts with Shell for the provision of the seventh-generation drillship Maersk Voyager for drilling services offshore multiple countries. The contracts were expected to commence by April, with a total firm duration of one year. The total contract value is approximately $107.5 million, including a mobilization fee but excluding integrated services expected to be provided and potential performance bonuses. The contracts include an additional one-year option.

To support a strong operational performance in the campaigns, Maersk Drilling and Shell have agreed to implement the RigFlow solution delivered by Maersk Drilling subsidiary Horizon56. RigFlow standardizes and digitalizes the core workflows involved in well construction, including real-time exchange of information between onshore planning units, the offshore drilling teams, and the service companies supporting the operations.

Separately, Maersk Drilling has been awarded a contract for the Maersk Resolve. The harsh-environment jackup rig will work for an operator in the UK sector of the North Sea starting in April, with an estimated duration of 150 days. The contract value is approximately $16.9 million, including mobilization and demobilization fees. The contract contains options to add additional work scopes with a total estimated duration of 85 days to the campaign.

The Maersk Resolve had been warm-stacked in Esbjerg, Denmark, since completing its previous contract in the UK North Sea in January 2022.

Additionally, Maersk Drilling has been awarded contracts for the harsh-environment jackup rig Maersk Resolute. It will plug and abandon a total of 31 wells in the Dutch sector of the North Sea in support of a rig-sharing agreement between TotalEnergies and Petrogas.

The contracts are expected to commence in Q2/Q3 2022, in direct continuation of the rig’s current contract, and will include the plugging and abandonment of 11 wells with TotalEnergies and 20 wells with Petrogas. The estimated duration is 575 days, and the total firm contract value is approximately $43 million, excluding potential performance bonuses. The contracts include options to add additional work scopes with a total estimated duration of 228 days.

Talos Energy has received the final Unitization Resolution from Mexico’s Ministry of Energy regarding the Zama field. Among other things, the resolution affirms the appointment of Pemex as operator of the unit. Unitization was required after determination that the field is located within both the Talos-operated Block 7 and an adjacent Pemex-operated block. It provides for joint development of the entire reservoir.

Talos will maintain a 17.35% participating interest in Zama, and the company anticipates submitting a Unit Development Plan for approval by the working interest partners within six to 12 months, a critical step before the parties can make a final investment decision in 2023.

Shell has announced the start of production at PowerNap, a subsea development in the US Gulf of Mexico with an estimated peak production of 20,000 bbl/day of oil equivalent (BOED). PowerNap is a tie-back to the Shell-operated Olympus production hub in the prolific Mars Corridor.

“Shell has been producing in the Mars Corridor for more than 25 years, and we continue to find ways to unlock even more value there,” said Zoe Yujnovich, Shell Upstream Director.

Separately, Shell – through subsidiary BG International – announced the start of production on Block 22 and NCMA-4 in the North Coast Marine Area (NCMA) in Trinidad and Tobago.

The start-up of Colibri follows the amendment to the Block 6 production-sharing contract for the Manatee field. This will allow for the delivery of gas both domestically and internationally through Atlantic LNG.

One-well contract extension with TotalEnergies EP Brazil for drillship VALARIS DS-15. The option well is in direct continuation of the current firm program and has an estimated duration of 100 days.

The previously disclosed contract awarded to VALARIS DS-11 for an eight-well contract for a deepwater project in the US Gulf of Mexico has been novated from TotalEnergies to Equinor. There are no material changes to the contract.

VALARIS 67 has been sold and retired from the offshore drilling fleet.

Hess takes FID to develop Yellowtail in Guyana, plans to start production in 2025

Hess has made a final investment decision to proceed with development of Yellowtail offshore Guyana after receiving government and regulatory approvals. Yellowtail, the fourth oil development and the largest on the Stabroek Block, is expected to produce approximately 250,000 gross bbl/day of oil starting in 2025.

Yellowtail will utilize the ONE GUYANA FPSO, which will develop an estimated resource base of approximately 925 million barrels of oil. Six drill centers are planned, with up to 26 production wells and 25 injection wells.

The well was drilled on the northern culmination of the greater Pavo structure and encountered a 60-m gross hydrocarbon column in the primary Caley member reservoir target. Wireline data has confirmed 46 m of net oil pay, with an oil-water contact intersected at 3,004-m measured depth (MD).

Wireline logging operations to collect pressure, sample and rock data across the target Caley reservoir have been completed. A 2C contingent resource for the northern culmination is assessed at 43 million barrels of oil gross.

“The Pavo-1 success is expected to support a potential low-cost tie-back to the first phase of the proposed Dorado development, with Pavo north having an estimated breakeven cost of less than $10/bbl, and future gas production from the Bedout basin providing a source of supply into our existing domestic gas infrastructure in Western Australia,” said Kevin Gallagher, Santos Managing Director and CEO.

To help meet gas demand in Europe, Neptune Energy and its partners will double gas production from the Duva field in the Norwegian sector of the North Sea by 6,500 bbl/day of oil equivalent (BOEPD). Duva is a subsea installation with three oil producers and one gas producer, tied back to the Gjøa semisubmersible platform. The gas is transported by pipeline to the UK’s St Fergus gas terminal.

Duva’s overall production currently stands at 30,000 BOEPD, of which 6,500 BOEPD is natural gas. Under the newly agreed measures, daily gas production will double to 13,000 BOEPD for an initial period of four to eight months. The increase in production is expected to supply enough energy to heat an additional 350,000 homes per day in the UK, according to Neptune.

Murphy Oil has achieved first oil from the Khaleesi, Mormont and Samurai field development project in the deepwater Gulf of Mexico. Production is flowing through the Murphy-operated King’s Quay floating production system. The Khaleesi/Mormont fields are located in Green Canyon blocks 389 and 478, respectively, and the Samurai field is located in Green Canyon Block 432. Completions operations are ongoing for the remaining five wells in the seven-well project. 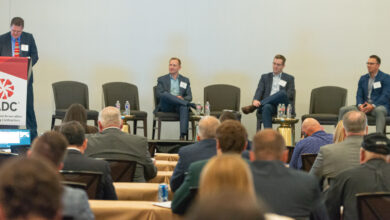 Industry panel: Companies must embrace the challenges that will come with the energy transition 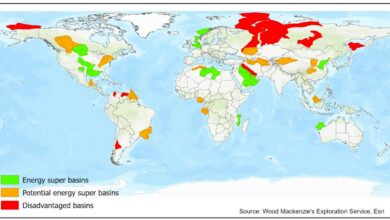